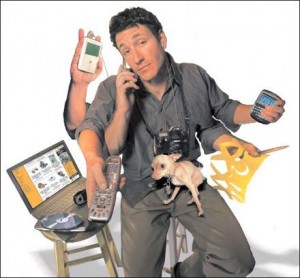 Multitasking . . . screwing up several things at the same time

Back in December 2007, I wrote an article onmultitasking denouncing it as modern information age malady, that was seriously affecting the performance of our concentration; thereby, our overall performance and most our happiness. Well, you would have thunk I was asking people to give up their first born. I heard catterwalling from students on the discussion boards of both Organize or Agonize and The Secret to Dealing With Overload. Everyone disagreed with me.

Well, I have been vindicated! My wife put this article on multitasking in front of my nose this weekend. It seems that a group of scientists at Stanford have done exhaustive testing in an attempt to find some redeeming social value in allowing the latest news headline, twitter, tweak, tinker, twink and text message to interrupt your focus and concentration. Not only could they not find anything worthwhile about multitasking, they found that the people who were doing the most multitasking were the worst at it. “Their performance was horrible” said Clifford Nass, a professor in Stanford’s communication department.

What makes me chuckle is the sub headline to this multitasking article, “Scientists are “totally shocked” at the the results of the study”. Social scientists have long known that it is impossible to process more than one string of information at a time. The mind simply cannot do it. To me, it is self-evident that multitasking can bring nothing but stress and the fear that I’m getting nothing done.

Multitasking and allowing constant distractions is ego mischief. The ego gets juiced from being in the know, gossip, righteous indignation and frightened out of its wits that it might be missing out. The ego hates peace and contentment. So it keeps its antenna out for every tidbit of news to fill its voracious appetite for nonsense.

Really getting into a task and doing it well has a sacredness to it. Something I was taught by my wonderful wise old journeyman mentors when I was a printers apprentice over 50 years ago . . . craftsmanship. Craftsmanship is doing your work well and with pride. I find that when I shut off the bells and whistles and grab one single task and give it all of my loving attention that sense of craftsmanship returns, and with it an inner contentment.

This multitasking article reminded me that much of my stress comes from all this electronic gear I’m surrounded with and the distractions it brings into my life. It’s funny to think that 50 years ago I got along fine without all this stuff. Seems to me the big issues that plague humanity have gotten worse, not better. We still kill each other at alarming rates and everybody is stressed out and unhappy. Are we really better off with all this technology?

This entry was posted in Cole and Sarah's Thoughts. Bookmark the permalink.